gVisor has implemented the RACK (Recent ACKnowledgement) TCP loss-detection algorithm in our network stack, which improves throughput in the presence of packet loss and reordering.

TCP is a connection-oriented protocol that detects and recovers from loss by retransmitting packets. RACK is one of the recent loss-detection methods implemented in Linux and BSD, which helps in identifying packet loss quickly and accurately in the presence of packet reordering and tail losses.

Both of these cases result in reducing the congestion window, with RTO being more expensive. Most of the existing algorithms do not detect packet reordering, which get incorrectly identified as packet loss, resulting in an RTO. Furthermore, the loss of an ACK at the end of a sequence (known as “tail loss”) will also trigger RTO and slow down future transmissions unnecessarily. RACK helps us to identify loss accurately in all these scenarios, and will avoid entering RTO.

Implementation of RACK requires support for:

Packet reordering commonly occurs when different packets take different paths through a network. The diagram below shows the transmission of four packets which get reordered in transmission, and the resulting TCP behavior with and without RACK. 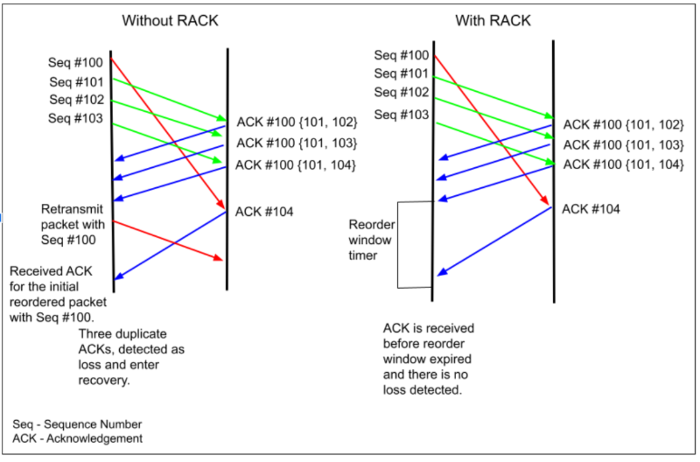 In the above example, the sender sees three duplicate acknowledgments. Without RACK, this is identified falsely as packet loss, and the congestion window will be reduced after entering Fast/SACK recovery. 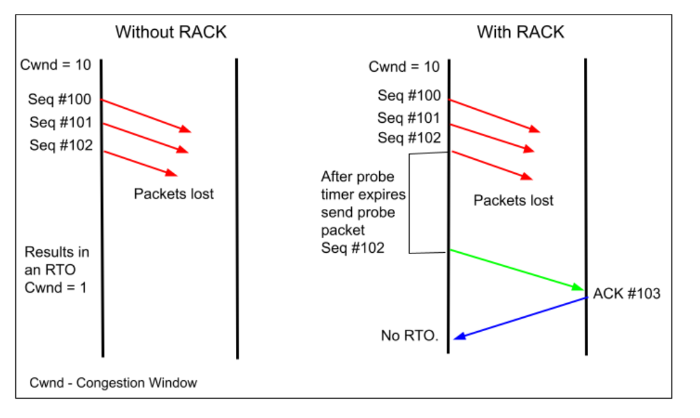 For tail losses, RACK uses a Tail Loss Probe (TLP), which relies on a timer for the last packet sent. The TLP timer is set to 2 * RTT, after which a probe is sent. The probe packet will allow the connection one more chance to detect a loss by triggering ACK feedback to avoid entering RTO. In the above example, the loss is recovered without entering the RTO.

TLP will also help in cases where the ACK was lost but all the packets were received by the receiver. The below diagram shows that the ACK received for the probe packet avoided the RTO. 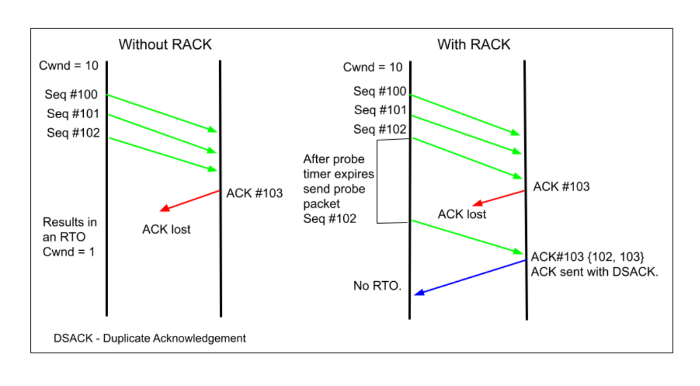 If there was some loss, then the ACK for the probe packet will have the SACK blocks, which will be used to detect and retransmit the lost packets.

In gVisor, we have support for NewReno and SACK loss recovery methods. We added support for RACK recently, and it is the default when SACK is enabled. After enabling RACK, our internal benchmarks in the presence of reordering and tail losses and the data we took from internal users inside Google have shown ~50% reduction in the number of RTOs.

While RACK has improved one aspect of TCP performance by reducing the timeouts in the presence of reordering and tail losses, in gVisor we plan to implement the undoing of congestion windows and BBRv2 (once there is an RFC available) to further improve TCP performance in less ideal network conditions.

If you haven’t already, try gVisor. The instructions to get started are in our Quick Start. You can also get involved with the gVisor community via our Gitter channel, email list, issue tracker, and Github repository.